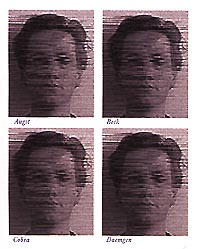 The main principles of Freundschaft are:

no rehearsels always live; each concert is a unique unrepeatable performance
no songs; each concert is an at least one hour uninterrupted show
no convention about the nature of any concert in advance
no expensive equipment, usage of consumer products, cheap and trash devices
no samplers; analogue gear as much as possible
no remote mixing; all sound streams are mixed by Freundschaft onstage
no stage show; the setting itself is the show
open concept with guests from different music styles involved
always as hard and loud as possible

With these ideas Freundschaft evolved as one of the most original and unconventional but also least popular acts within the Frankfurt techno and techno-music scene. Concerts are rare and seldom events.

At this stage Freundschafts members have reached a kind of critical mass, where every member of Freundschaft could produce nearly the sound of Freundschaft alone. So that at a "concert" it becomes a competition among the four members who will get through the soundwall produced by the others, to represent the "real" Freundschaft at that given moment.

The members of Freundschaft are: