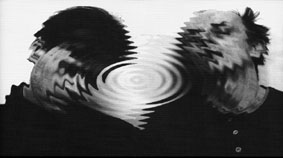 Elggren and Liljenberg have been collaborating since 1975 on joint projects under the common identifier Firework.

A node in this collaboration was the establishment of the publishing company Firework Edition in 1978. This company also puts on exhibitions.

Under this title a continuous series of books and other print works, multiples, audio works and exhibitions have been produced over the years, featuring not only these two artists but also collaborations with other artists.
Some major productions over the last few years are the books and exhibitions entitled IDOL and Experiment with Dreams, and the CD's Zzz...(As close as we can get to the dream) and Codfish Suit.

"You ladies and gentlement of good standing. You who do not have personal knowledge of Christian vice and debauchery. You observe the deeply sunken eyes of the lower classes and see in them clear evidence of worry and hardship which weighs upon your hearts. Not all of those who rise in the morning to regard in the mirror over the hand basin their own distorted image are victims of alcohol abuse, nay the causes must be sought elsewhere, among your friends from near and far. All those under you, who are free of sin, let them come to me and I shall beg them for mercy and forgiveness"