The Turin Machine
is a performance/installation which uses a giant pinhole camera to create life-size photographic portraits of the artist. During the festival the audience enters the camera to view the process of exposure and thus witness the act of "taking a photograph". The work occurs over three days, each day resulting in the exposure of a picture or "shroud". These cloths are the developed and exhibited as evidence of a reality.

The origins of this work lie in recently conducted research into the possible techniques involved in the manufacture of the Turin Shroud. It has been suggested that the Shroud is a medieval forgery made by using early optical and alchemical technology: namely a pinhole camera and a cloth coated with light sensitive chemicals. If this is the case then the Shrousd is fact the first photograph. 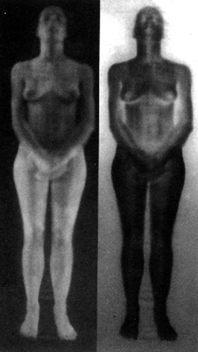 I have taken this notion and stretched it to reflect some of my own concerns. The Turin Machine is a basic camera: a box with a hole in it. Light from an illuminated exterior scene passes through the aperture into the darkened interior to form an inverted image upon an opposing screen.

Thus the camera mimics the eye. On entering the camera the image is initially obscure and only appears gradually as the eye becomes accustomed to the dark. Even then, due to the lack of light, the picture is rendered in simple shades of black and white.

In The Turin Machine I hope to confuse the boundaries between the live (body) and the recorded (photograph). When you look into the camera the image you see is not a recorded one, rather it is a live presence in the process of becoming a record. This is possible because the conventional exposure time of a photograph - a fraction of a second - is now extended to many hours, allowing enough light to pass through the pinhole and create an image. The shutter remains open magnifying our experience of time and revealing a space to contemplate the act of looking/image making.

After a number of hours sufficient light has passed on to the screen and it is removed ready for development. Until this moment no mark has been made upon the material, in effect the image that have been seen in the camera is merely my projection, the screen has remained blank. However the cloth contains a hidden picture, one that has been made by light concentrated through the passing of time. With the application of developer it is this image that is now revealed, in negative, a witness to this process.

For me, as a piece of photography "the Shroud" is the first and the ultimate photograph. As such it is a mass of contradictions. Unique and yet potentially a machine-made multiple. Evidence of a life in death. An identity which tells us nothing. A tabula rasa changing with the speculations of history. A relic for a faithless faithfull.