Born in Belfast, Northern Ireland and living in London since 1980, Stitt is considered one of the UK's foremost art performance creators. He has worked as a live artist since 1977, producing over 250 unique performances at major galleries, festivals, alternative venues and public spaces throughout the UK, Europe, North America and his native Ireland.
As a contributor to international cultural networking Stitt has been active as a writer for the underground press and a founder member of the highly successful London based Exploding Cinema. He also regularly performs his own poetry and music with the Self Righteous Brothers and has an album, "Working On The Bypass" available on the experimental arts label ND based in Austin, Texas. 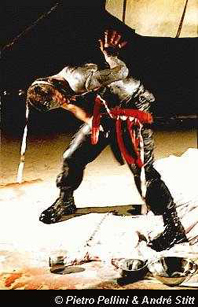 Stitt is identified with a strain of performance most seen in Europe, relating more to visual art and art action (identified in Stitt´s work as "akshun") than conventional theatre.

His work focuses on difficult themes; issues of oppression, freedom, subversion, experiences of alienation, appropriation of cultures, transgressive and ritual akshun; a continuous journey to the heart of contemporary addictions.
Stitt's uncompromising style has been variously described as "...enigmatic and corruptive... unmissable..." (Time Out, London), "...fierce integrity... immediate, spontaneous, releasing..." (High Performance, USA), and Performance Magazine (UK) has described him as "...perhaps our shaman who is prepared to explore what most of us would not care to be let alone even try and express."

All of Stitt's work is seen as a continuous ongoing revelatory evolution with the artist cast as contemporary 'trickster' figure under the functioning title Akshun Man Trixter Cycle.

"Stitt's concerns are made manifest via actions - or akshuns - that have no truck with the cool readings of post-modernist applications or the politically correct terminology of balance and representation. His works are about breaching the facade which society constructs against the deviant and dispossessed, and the synchronous fascination that we have with those who live outside these codes. Stitt purposefully seeks to occupy this bleak space, tainted by his own subjective evolutions and perceptions, filtering his prismatic observations, guilty desires and self-loathings through the looking glass of performer and audience. Works that are intensely honest and therefore intensely flawed, investigations that both repulse and attract with their hypnotic momentum for excess. They are the detritus of an artist who has consistently embodied the traits of the 'trickster' for the duration of his career." - Rapid Eye, UK

Life as the initiation, the eradication of ignorance

Every akshun is the performance of consciousness

Those who are awake live in constant amazement

Here we face the liquidation of resistance