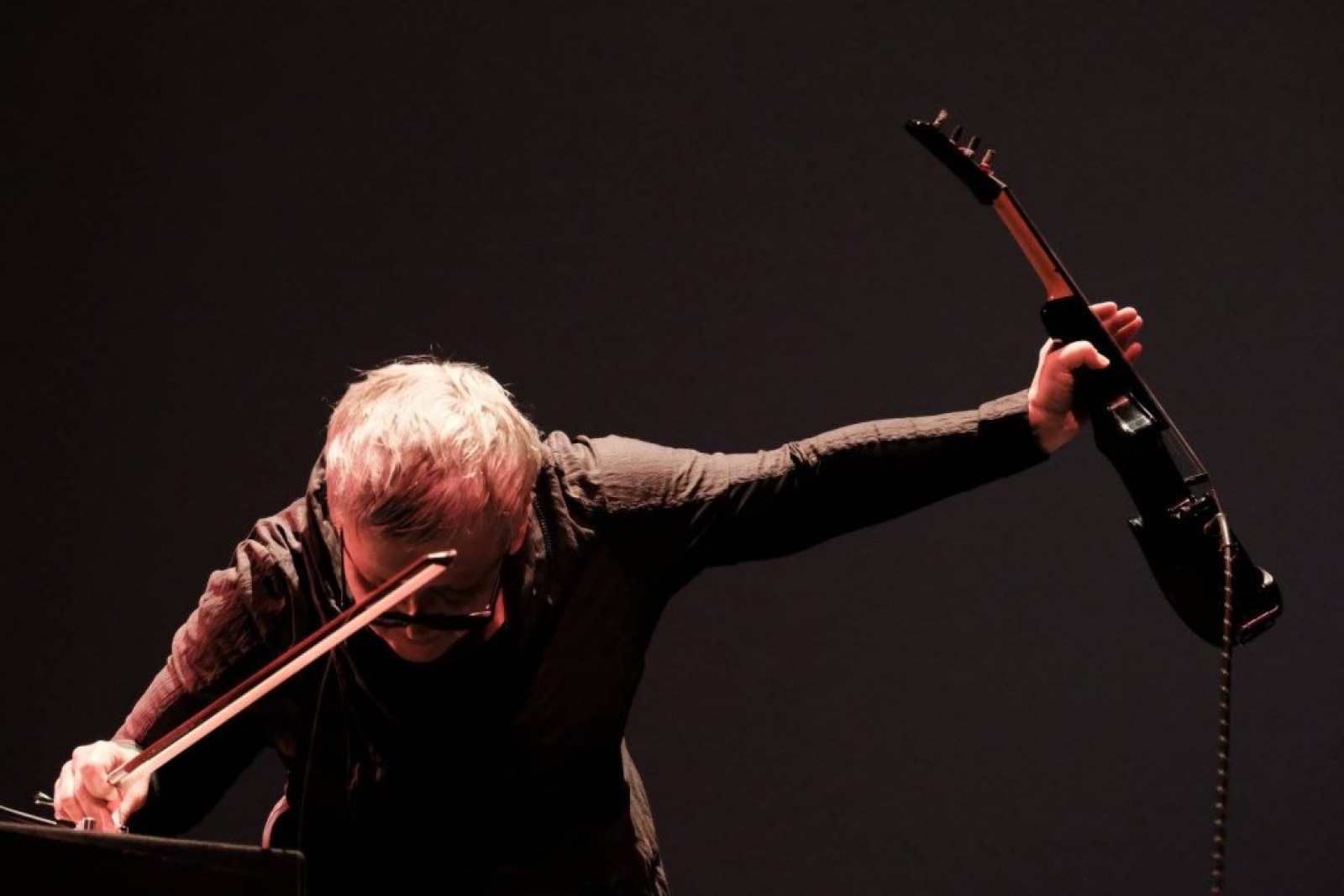 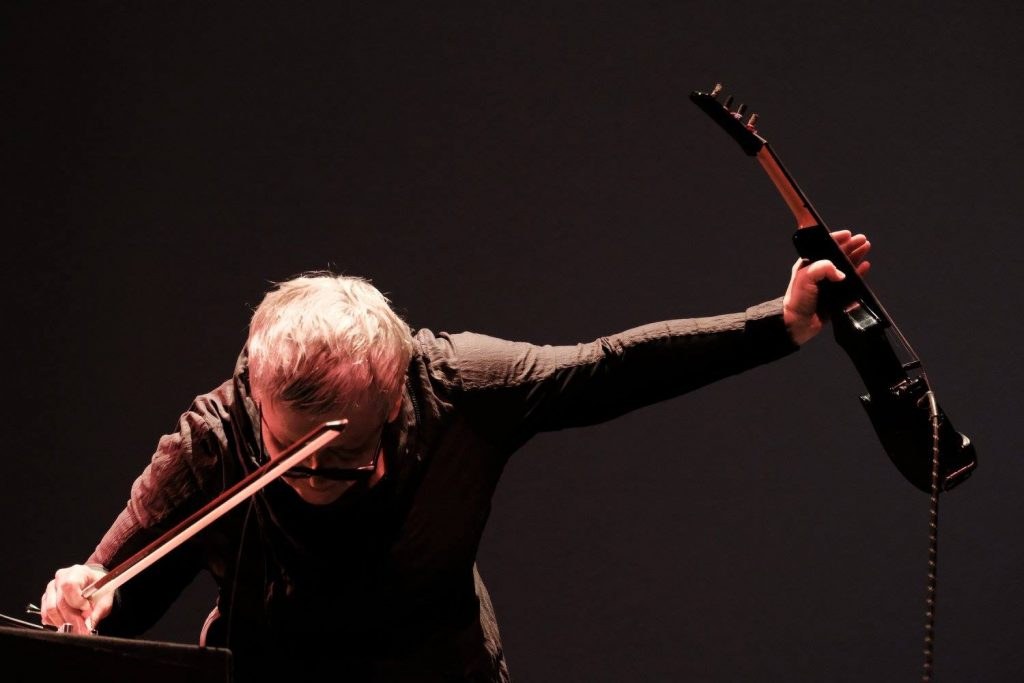 https://www.miazabelka.com/mia-zabelka/
Austrian violinist, vocalist and composer Mia Zabelka is at the forefront of international electro-acoustic performance art. She developed her unique musical language in a process she calls
“automatic playing”, where the music grows out of her physical movement and finds its expression in her electric violin with electronic devices, alien objects, vocals, and/or acoustic violin.
Using this set up she is given the opportunity to expand the sound range so extensively that the violin itself becomes an interface, an electronic sound generator and thus a sound machine.
Mia Zabelka is continuously exploring sound and music as physical phenomena, always pushing back the boundaries in experimental performances and compositions that question established notions, improving the available techniques and given structures. The violin and her own voice and body are transformed in the process into sound bodies which are at once organic and primal, screaming, lyrical, composed and explosive. Mia Zabelka is currently the artistic director of Phonofemme Festival Vienna and Klanghaus Untergreith in the region of South Styria. 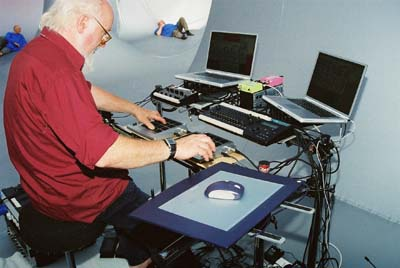 Lawrence Casserley (born UK, 1941) has devoted his professional career, as composer, conductor and performer, to real time electroacoustic music. In 1967 he became one of the first students of
Electronic Music at the Royal College of Music, London, UK, on the new course taught by Tristram Cary. Later he became Professor-in-Charge of Studios and Adviser for Electroacoustic Music at the RCM, before taking early retirement in 1995. He is best known for his work in free improvised music, particularly real-time processing of other musicians' sound, and he has devised a special computer processing instrument for this. He has worked with many of the finest improvisers, particularly Evan Parker, with whom he works frequently as a duo partner, in various larger groupings and in the Evan Parker Electro-Acoustic Ensemble. He also works as a soloist,
processing sounds from voice, percussion and home-made instruments. CDs have been released by ECM, Konnex, Leo Records, Psi, Sargasso and Touch. Much of Casserley's work has involved collaboration with other art forms, including poets, eg Bob Cobbing, and visual artists, including
Colourscape artist Peter Jones. He is a Director of the Colourscape Music Festivals, presenting contemporary music in the unique environment of the Colourscape walk-in sculpture. He also collaborates with Peter Jones on sound/light installations. Casserley's "instrumental" approach to live computer sound processing is the hallmark of his work; the Signal Processing Instrument allows him to use physical gestures to control the processing and to direct the morphology of the sounds. This is the culmination of forty years of experience in the performance of live electronic work; his earliest live electronic pieces were performed in 1969, and he has performed many of the live electronic "classics" of the 20th century; he has also collaborated with other composers to realise their electronic performance ideas. He is noted for the breadth and variety of his collaborations, which cross styles and generations. 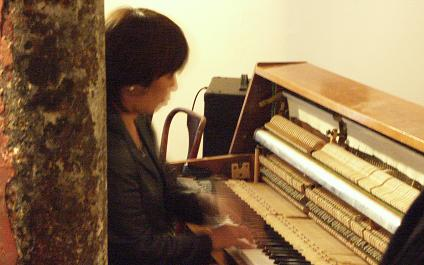 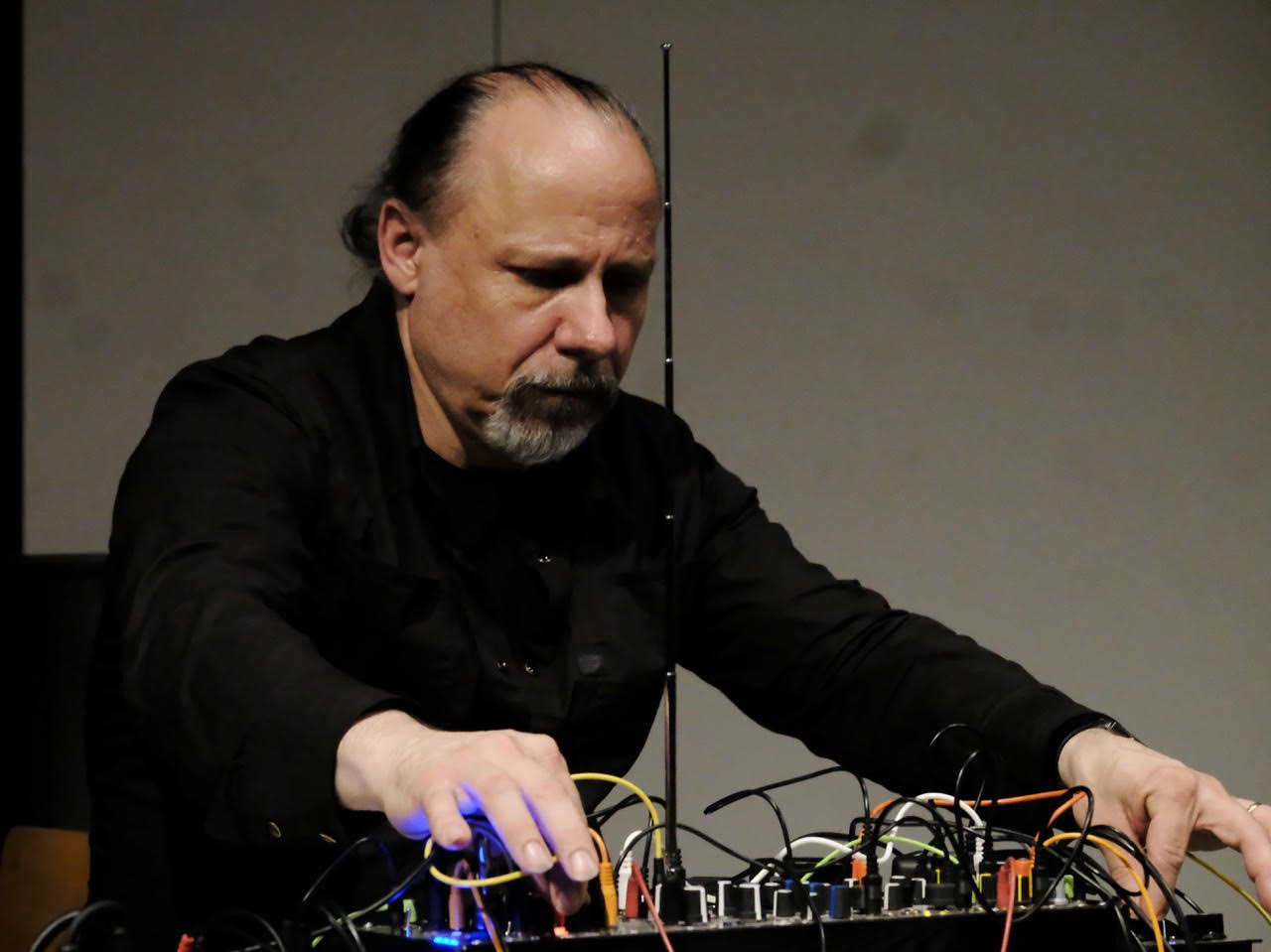 Lars Bröndum (photo C. Marx)
Lars Bröndum, PhD, is a composer, performer of live-electronics, theorist and guitarist. His music has been performed in around the world. His music often explores the interaction between acoustic and electronic instruments and lives on the border between notated music and improvisation. The compositions are structured around cyclical processes, irregular ostinatos, fragmented gestures and microtonal clusters. Lars performs live using an analog modular system, a Theremin, effect pedals and sometimes a laptop with Max/MSP. Other projects that he is involved in are the Aleatoric Chamber Ensemble and the Bröndum & Gärdin Duo. Bröndum is the founder of the independent record label Antennae Media. His’ cds “Fallout”, ”Phaethon” and ”Aleatoric Anthems and Palindromes” has been awarded best independent Experimental Music by SOM (Swedish Independent Music producers). In 1992 Bröndum finished his PhD in Composition & Theory at the University of Pittsburgh. The dissertation is entitled “Formations for Chamber Orchestra” and “An Analytical Study of Voice Leading and Pitch Class Set Structure in György Ligeti’s Kammerkonzert Für 13 Instrumentalisten”. “Formations for Chamber Orchestra” is an original composition and the analytical part proposes a model for analyzing cluster music by combining set theory and linear analysis. Lars also has a Masters in Music in Composition and Music Theory (1989) and a Bachelors of Music degree in Guitar Performance (1987) from the Dana School of Music at the Youngstown State University. Lars is currently a professor in Music at Skövde University. More info here: antennaemedia.se 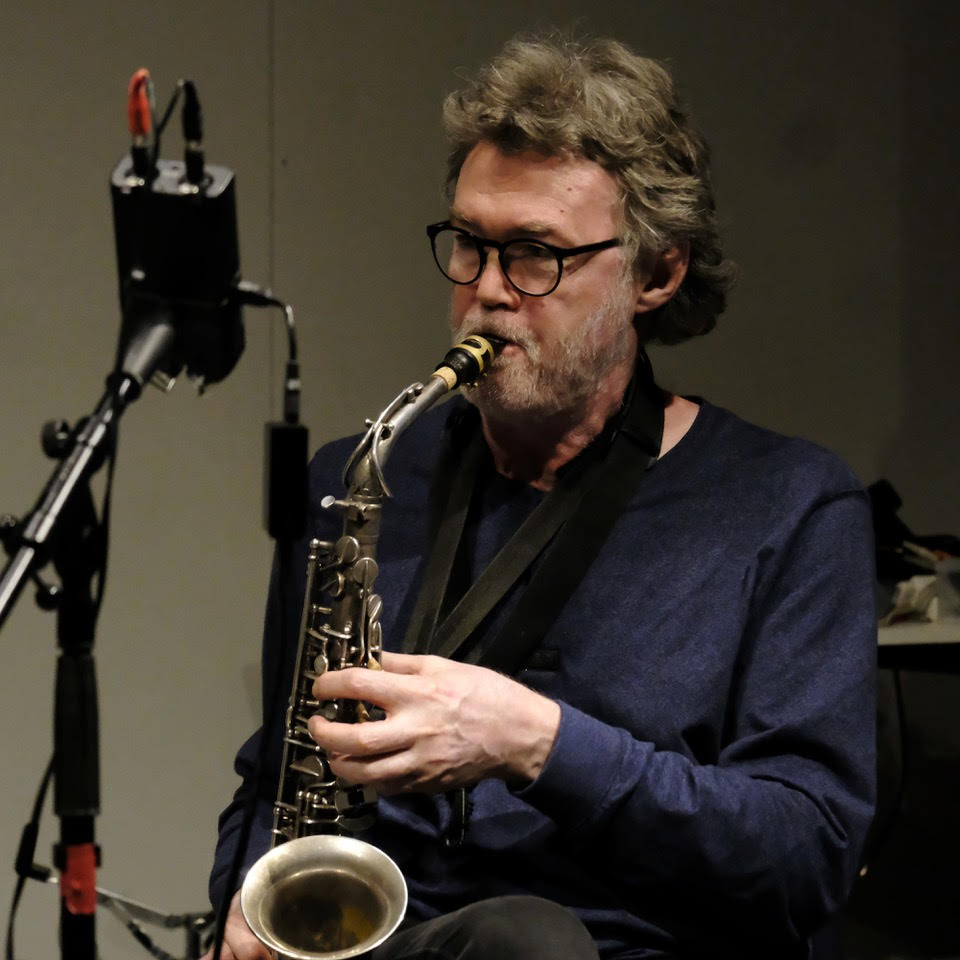 Lars Bröndum & Per Gärdin duo has released three albums, ”Adhara”, "The Tail of the Snake” och ”A Matter of Time” and has performed in Berlin, Uppsala & Stockholm. More info: https://pergrdin.bandcamp.com/ and http://antennaemedia.se/Home/Brondum_Gardin.html 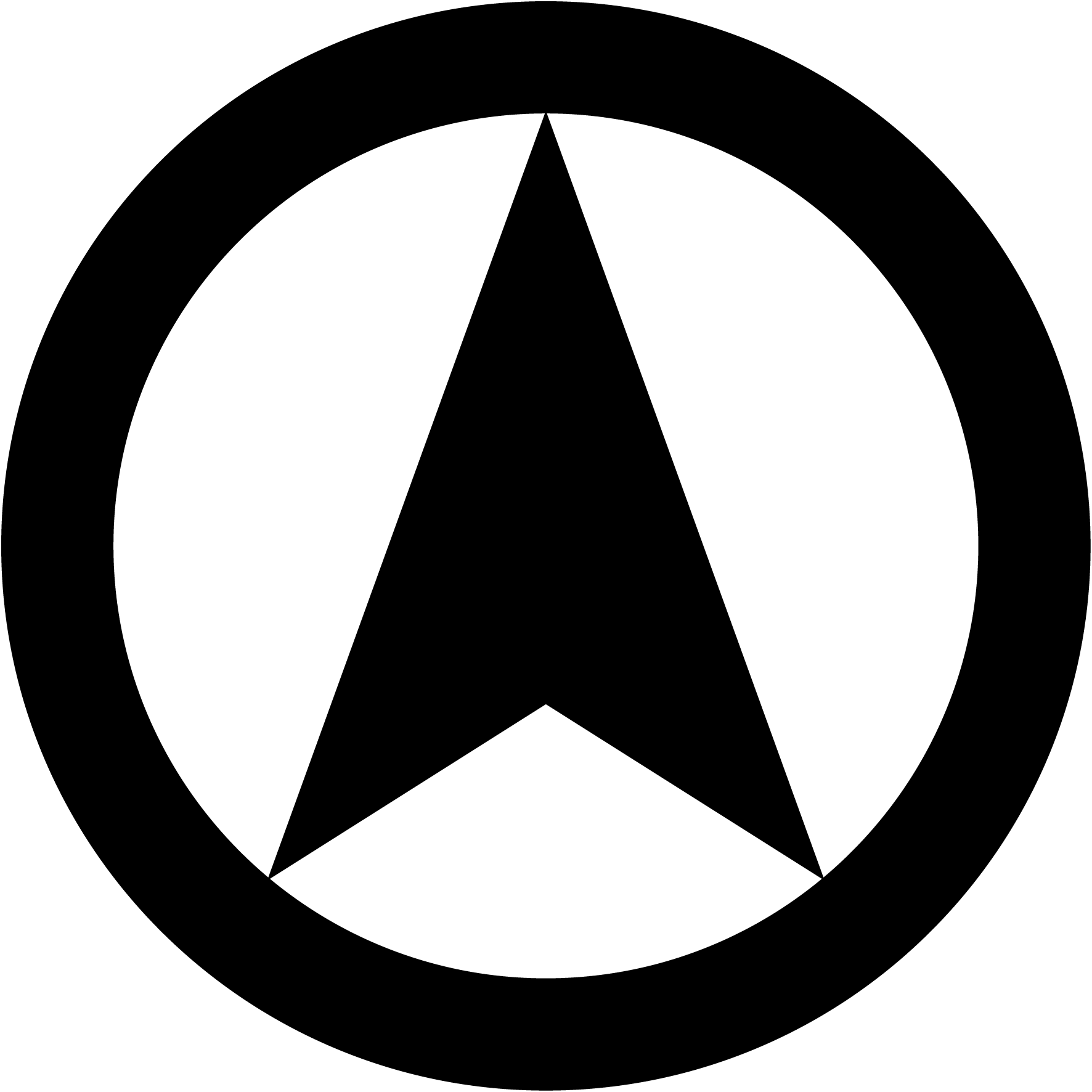