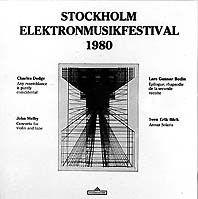 During some years, since 1979 and onwards, the Swedish Radio Company and the Stockholm Electronic Music Studio (EMS) arranged an annual 3-day festival for electronic music in Stockholm. Its purpose was to present a sample of the electronic music being composed in different parts of the world. This record contains four works from the 1980 festival - two are Swedish and two are international; two are for tape and two combine tape with live performance.