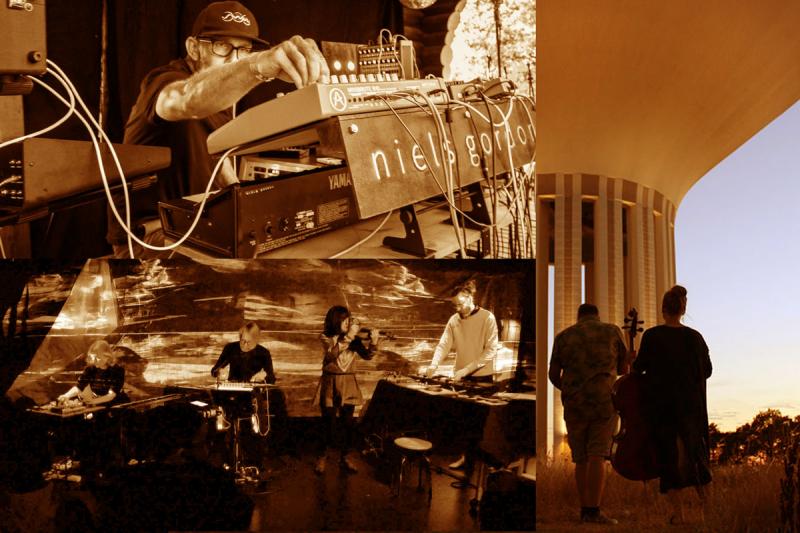 Niels Gordon started developing his style of instrumental electronic music when rebuilding his studio around 2012. At this time he got rid of all computers during the creative process to get closer to the origin of electronic music. The result is a kind of organic electronic music with cosmic vibe. So far Niels has released two EPs ‘Ohrnacht’ and ‘Central European Tyme’ both recorded live in the studio without the use of multi tracking or MIDI sequencing. Relying on analogue sequencers, synthesizers and drum machines in combination with cheap home organs and various effects.

Following the release of ‘Central European Tyme’ Niels executed his first live performances in 2017. Mainly in smaller clubs and festivals but also as warm up for his childhood heroes O.M.D. The live performance is executed by Niels alone without the use of computers or backtracking. During the summer of 2019 Niels completed his debut album ‘Land’ set for release on Lamour Records the coming winter.

On Fylkingen he will premier some previously unheard tracks from ‘Land’ alongside some of his earlier works. All performed in a slightly improvised cosmic stream of more or less organized sounds.

Perseid
With Electronics and Cello the Perseid duo make slow evolving music meant to be enjoyed under an open night sky. Whether doing deep meditational drones under the stars or while deconstructing classical music structures Perseid delivers noise and ambience with precence and heart.

The set “Unreadable Communication” revolves around the topic of overheard conversations. Encrypted code meant for someone else entirely, but which in the minds of those hearing it in transit transforms into new shapes and meanings.

OLÅT – Eva Lindal violin together with Ida Lundén, Thomas Bjelkeborn and Viktor Zeidner on various electronic. The musicians in OLÅT are well-known innovators who together create thoughtful soundscapes in warm landscapes.

Eva Lindal is a freelance musician, with a special focus on improvisation, and contemporary music, as well as the baroque era. Eva is a member of Katzen Kapell (“One of Sweden’s best bands”—Camilla Lundberg, Expressen), Rebaroquerebaroque.se and also the contemporary groups MA and KammarensembleN.

Ida Lundén is a composer and musician, active primarily in chamber music and electronic music. She creates imaginative works for odd combinations of instruments such as viola and potato or bass singers and double basses.

Viktor Zeidner aka Slim Vic is Swedens leading innovator of the DJ and turntable culture. With one foot in the urban club music and the other in arts music he combines the different worlds and constantly moving the boundaries of what is technically and musically possible with the traditional and proven context.

Thomas Bjelkeborn has been active in contemporary art music since 1988, and is primarily established as an EAM composer in an international context. His music is based on current musical technological innovation with the aim of expanding the domains of art music, where in-house developed physical-digital musical instruments are often combined with advanced audiovisual media.