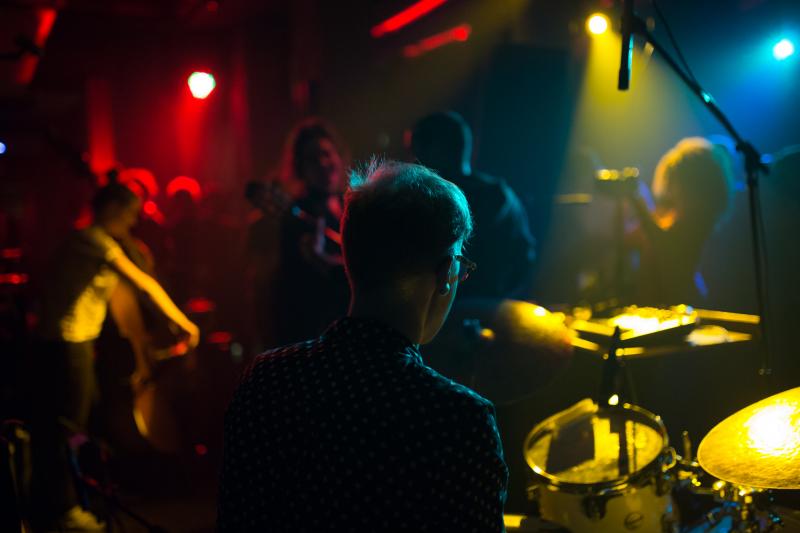 Nadah El Shazly is an Egyptian singer and composer living and working in Cairo. Starting out singing Misfits covers in a local punk band, then moving on to producing her own electronic tracks and making a name for herself in Cairo’s underground scene, Nadah El Shazly’s backstory is not that unusual. Her debut album on the other hand, is an entirely unexpected story.

Recently released on Nawa Recordings and entitled Ahwar (marshlands) - at No. 12 in The Wire’s best 50 albums of 2017 - it is a culmination of two years of writing and studio work split between Egypt and Canada. The album was composed and arranged in collaboration with Maurice Louca and Sam Shalabi, two members of The Dwarfs of East Agouza trio.
This is an otherworldly record, not unlike an abstract mythological story-tale.

Most recently, Nadah became resident composer at Stockholm’s Elektronmusikstudion (EMS) and was featured within local and international festivals including Norbergfestival, Clandestino, Supersonic, Le Guess Who? Her newly found kinship with Sweden has led her to collaborate with Stockholm based musicians and the formation of a new band and arrangements to perform Ahwar for us this evening.

"Cairo-based singer and composer Nadah El Shazly performs to a seated crowd who revel in her stunning vocal work. It's testament to the quality of her set that despite the almost unbearable heat in the space that has people pouring water over their heads and frantically fanning themselves, they stick around. The performance is intoxicating and at points nightmarish but resolutely beautiful" The Quietus on her Supersonic Festival concert

Stream her album via The Wire's website and check her interview there also;
https://www.thewire.co.uk/audio/tracks/stream-nadah-el-shazly-s-new-alb…

Dog Life explores free improvised music on a high-energetic plateau, descending from the outskirts of free jazz, and further towards a harder, darker and undefined terrain. On their new album, released on Omlott records in fall 2017, they continue to push the freejazz-punk limits and set out new directions with elements of doom and noise.

"I have seen Dog Life live once, and was knocked by the power, ...The trio is pulling and tugging in melodic threads, the rhythm section flaps and rumbles, and in the center Anna Högberg's saxophone, hard, punky, but with a flow that convinces to the very last second". PM Jönsson, GP

"Anna Högberg is grubbing and fussing with her saxophones, twisting an turning her ideas in a frenetic debate with bass player Finn Loxbo and drummer Mårten Magnefors, who are more of dialogue partners than a rhythm section [... ] this music is absolutely brilliant." Magnus Eriksson, Lira

Oldie but a goodie; https://soundcloud.com/d-o-g-l-i-f-e/cigg-eller-filter

Featuring some of the most innovative players from Beirut, Cairo and Istanbul, Karkhana met in Beirut for the first time in February 2014, bringing together influences from the three major experimental music scenes of the region and beyond. Through their live shows, the band’s seven multi-instrumentalists build a transcendental atmosphere full of surprises for the audience and themselves alike, developing what could possibly be called free Middle Eastern music. Shades and traces of shaabi, tarab, sufi and much more are heard in the distinct blend of free jazz and psychedelic they’ve created.

“I wish I could track down more of this tantalising outfit’s music to share… This Middle Eastern supergroup first got together to celebrate the music of Egyptian surf guitarist Omar Khorshid – who was also a key figure in Oum Kalthoum’s orchestra – but their remit has expanded somewhat and now they’re fully committed to outer-perimeter explorations in Krautrock-leaning, cosmic free jazz” John Doran, The Guardian