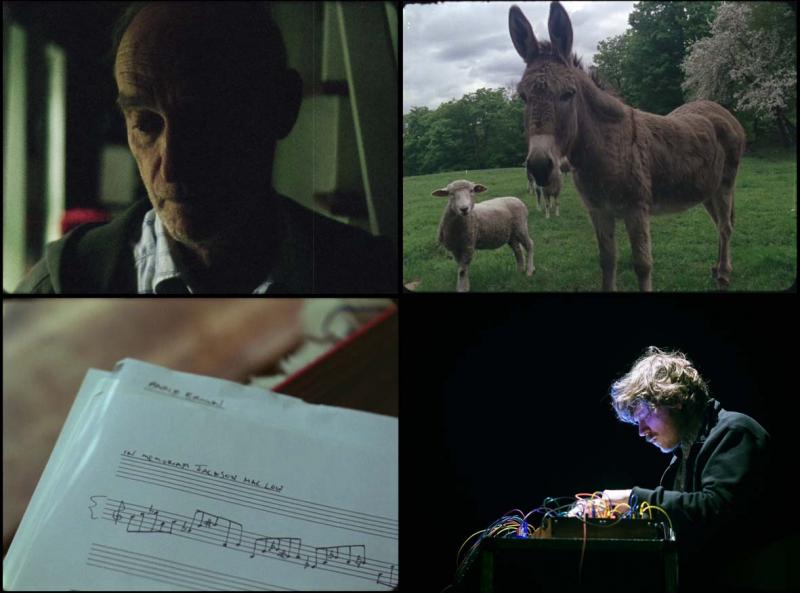 The British artist, filmmaker and musician LUKE FOWLER has over the past 15 years, developed a practice that is, at the same time, singular and collaborative, poetic and political, structural and documentary, archival and deeply human. With an emphasis on communities of people, outward thinkers and the history of the left, his 16mm films tell the stories of alternative movements in Britain, from psychiatry to photography to music to education. Working with archival materials, his own 16mm footage, and sound recordings made in collaboration with sound artists such as Lee Patterson and Eric La Casa , Fowler has constructed complex portraits of psychiatrist R.D. Laing, experimental composer Cornelius Cardew, Marxist historian E.P. Thompson and reclusive environmentalist Bogman Palmjaguar. Whilst some of his early films – such as Pilgrimage from Scattered Points (2006) – dealt with music and musicians as subjects, in later works, most notably A Grammar for Listening (2009), sound itself becomes a key concern. Sound as process but also sound as a possibility for approaching filmmaking practice from a more acknowledged collective position. Oscillating between a tradition that reaches back to filmmakers such as Gregory Markopoulos, Peter Hutton, Warren Sonbert and Robert Beavers – on whom P. Adams Sitney has written the filmmaker is “a hands craftsman, focusing the lens, pushing a filter across the plane of vision, making a splice” – and a collaborative, almost communal approach to artistic creation, Fowler’s own influences draw equally from experimental music, British Free cinema and American avant-garde film. An active member of Glasgow’s music and arts community, his curated screening includes work by other artists based in that city (Duncan Campbell, Charlotte Prodger, Stephen Sutcliffe) and provides insight into his network of collaborations and influences.

JOHN CHANTLER is a musician and organiser living in Stockholm, Sweden working with synthesizers, electronics and sometimes pipe organs to explore his own personalised compositional and improvisational strategies - working with and against the specific systems inherent in his chosen tools. His most recent LP - Which Way To Leave? (ROOM40) - charts an unpredictable, highly dynamic course through distorted washes of masses harmonics and passages of spare, alien beauty. This follows Still Light, Outside (1703 Skivbolaget) - an extended suite that combines passages of stark minimalism centred at the bodily invasive extremes of the pipe organ’s register with striking explosions of colour; massed chords shot through with heavy distortion and electronics that operate according to their own dream logic.

Entré: 80kr for Fylkingen members/students/unemployed
Card is the Queen
Doors open at 7pm

ABBEYVIEW FILM
uk / 2008 / colour / silent / 16mm / 24fps / 9’00
Commissioned by Abbeyview artist in residence (2007-2008) Nicola Atkinson Davidson as part of regeneration funding for a deprived housing estate in Dumfermline , Scotland. Rather than choosing a clear stance in relation to the subject of a deprived area, Fowler offers a contingent, at times contradictory, poetic snapshot of a community. The film resists traditional documentary and cinematic representation of housing estates, striving instead to build an aesthetic of ambivalence and hope.

GRAMMAR PART I
uk / 2009 / colour / sound / 16mm / 24fps / 22’00
Over the centuries, Western culture has relentlessly attempted to classify noise, music and everyday sounds… Ordinary noises and the mundane sounds that are not perceived as either annoying or musical are of no interest. How to create a meaningful dialogue between looking and listening? Luke Fowlers film cycle “A Grammar for Listening (parts 1-3)” attempts to address this question through the possibilities afforded by 16mm film and digital sound recording devices. In part 1, Fowler furthers his on-going dialogues with the sound artist Lee Patterson (Manchester, England).

FOR CHRISTIAN
uk/usa / 2016 / colour / sound / 16mm / 24fps / 6’47
“For Christian” was filmed during a residency I had at Dartmouth College, New England, in spring 2013. Through Larry Polanski in the electronic music department I met the composer Christian Wolff, who had taught comparative literature at Dartmouth until 1999. For Christian features short extracts from a longer interview which covered a variety of his compositional strategies from writing text scores for non-musicians to indeterminacy, cueing and his turn in the 1970’s to writing pieces with a consciously progressive content. A week or so later I travelled out to his farm in Vermont which he runs with his wife and son and filmed my impressions there. The film is bookended by two of his dedication pieces – one for Alvin Lucier and the other for David Tudor. (LF)

THE ROOM
uk / 2008 / colour / live sound / 16mm / 24fps / 20’00
Live music performance and film by Luke Fowler "The Room" comprises of three films which were initially inspired by a collaboration between the filmmakers Peter Todd, Luke Fowler and the musician Keith Rowe*. The Room was first used as a title for Rowe’s 2007 piece (released on CD ErstSolo 001), in part a tribute to two of his two key influences, Cornelius Cardew and Mark Rothko, and gave its name for a live performance for which Todd’s films (and Fowler’s) were originally created – extending the idea of the acoustic chamber into a filmic meditation on the movement of light and time passing within specific interiors. The three resultant films (London, Berlin and Morley College) make poetic use of the camera to evoke the passage of time across space.

ADVANCE THE UKNOWN
uk/de / 2008-9 / colour / live sound / 16mm / 18fps / 5’00
Duo performance by John Chantler and Luke Fowler.
I filmed a diary for the period just before and during the curse of exhibition, the film rushes were shown unedited and changed fortnightly. During this exceptionally bright and cold winter I moved house twice, visited friends in Berlin, recorded music, travelled by train etc.(LF)

CONVERSATION
Conversation between John Chantler and Luke Fowler about image and sound + Q&A.