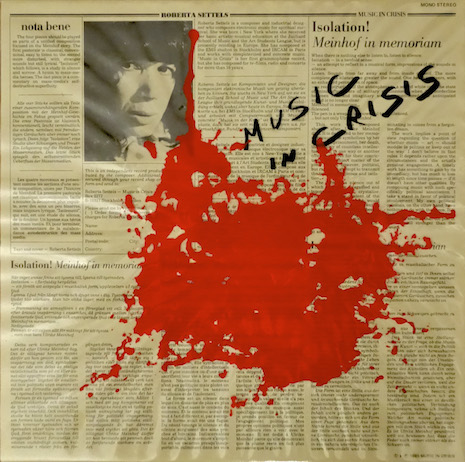 Roberta Settels (1929-2014), American composer who moved to Europe, released the LP Isolation! Meinhof in memoriam in 1985. The record remains even today as one of the most personal records with electroacoustic music ever produced in Sweden. The work is dedicated to Ulrike Meinhof, and should be seen both politically and as a study in the isolation and silence which Meinhof experienced during her imprisonment.

The record was initially planned to be released on Rikskonserter´s label Caprice Records but they stopped the production in the last minute because of the controversial political topic it could be regarded to have. Instead Settels started her own record label, Music in Crisis, on which this LP became the only release. The LP cover is made so that the convolute is folded in a plastic sleeve, screenprinted by hand, with a blood-like red stain partly covering the picture of Settels´ face.

Fylkingen is proud to be able to offer a number of original copies of the LP for sale, which have been Roberta Settels´ private property until now.

Roberta Settels was born in New York, studied at the Juilliard School of Music and later moved to Europe. She worked during the 70s and 80s at EMS in Stockholm, and was also active at Fylkingen during this period. Roberta Settels has also resided partly in France and was during the 80s active at IRCAM in Paris. In the 90s she got a scholarship to work with Iannis Xenakis and she also built her own studio.