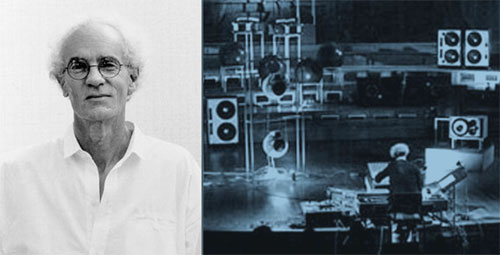 Regarded is one of the most distinguished composers in the world of electronic art music, Bayle’s influence is widespread. His music is notable for its masterly craftsmanship and rhetoric, its agile discourse and its sophisticated thought. Bayle has received some of the most prestigious musical awards.

In the 1950s he studied with Olivier Messiaen, Pierre Schaeffer and Karlheinz Stockhausen. In 1960 he joined the Office de Radiodiffusion Télévision Française, and in 1966 was put in charge of the Groupe de Recherches Musicales (GRM). In 1975, the GRM was integrated with the new Institut
national de l'audiovisuel (INA) with Bayle as its head, which post he held until 1997. During these years he organized concerts, radio broadcasts, seminars and events celebrating individual composers, supported technological developments (Syter, GRM Tools, Midi Formers, Acousmographe) and was
behind innovations such as the Acousmonium and the INA-GRM recordings label.

After leaving GRM in 1997, he founded his own electronic music studio, the Studio Magison, where he has devoted himself to research, writing and composition.
For additional information about François Bayle: www.magison.org