Presented here is a part of the longer text and with this link you can download and read the complete essay. 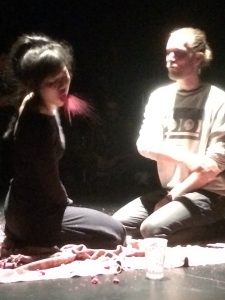 The performance revolves around two bodies, a set of objects (colored balls of dough) and a set of rules:
° Two participants are seated facing each other under a light bulb in a dark room

° Red cookie means: slap the cheek/ receive a slap on the cheek

° White cookie means: caress the cheek/ receive a caress on the cheek

When the first slap comes it sounds like an axe falling hard into a block of wood. Here again we have objects, bodies and actions that reach a level of representational effectiveness within the contexts provided by performance. The bodies respond with violence or a symbolic act of care, in the caress, but the minds occupying each body does not know, as far as we understand, which it will be. It is the objects, the colored balls of dough, which facilitate the exchange within space. The randomness of the body actions, and their violence, makes the performance a shocking insight into what human beings are capable of. “Intimation” lasted about half and hour, at the end Bohm Calles and Ljuus were visible shaken and looking nauseous. This agonizing but relatively short duration of the performance makes it a powerful work of art.

Ljuus and Bohm Calles’ “Intimation” contains elements of violent spectacle. The intention and clarity of the work come through as disturbing for the viewer, when the audience is dramatically faced with the fact that they are the spectators looking at violence. With “Intimation” we watch violence in the controlled environment of performance, a violence framed by location and mediated by objects, but at the same time that is outside the control of the artists and of the audience. The image is now real (i.e. non-symbolic) and we are its victims. Through the loss of control both audience and artists are placed on an equal level of agency. Spectatorship is thus lessened within the spatio-temporal structuring of “Intimation”. The objects as mediators (the red and white balls of dough) allow this to happen.