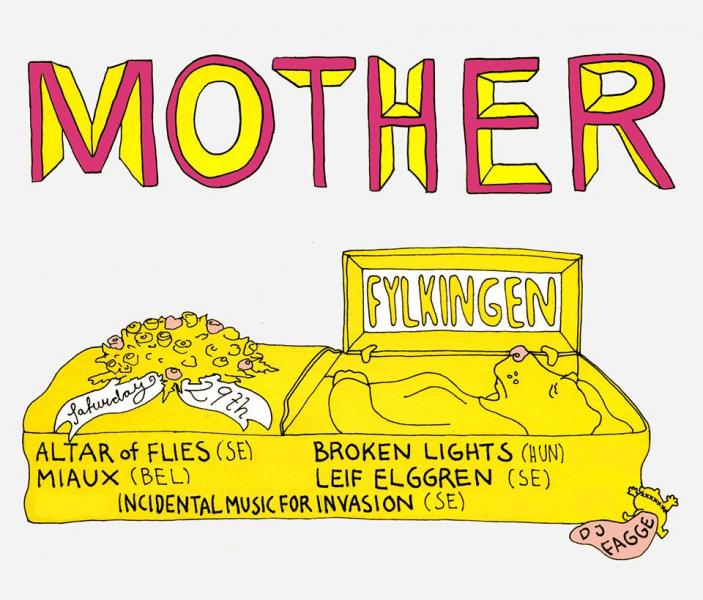 "Altar of Flies is back on iDEAL with this new, untitled album, his first since ”Permanent Cavity” (2010). Mattias Gustafsson's industrial, Mjölby-style musique concrète is deeply personal and even though the music is often sparse and minimal, it always contains restrained energy explosions and psychic tensions. This, his fifth proper LP (and a long line of nice releases on hot labels like Release The Bats, Järtecknet and A Dear Girl Called Wendy), is a modern noise master piece. There are tons of great records out there, but few messes with my mind as well as this album. And that is to me, a true sign of quality!"
- Joachim Nordwall, Gothenburg, August 2014.

Leif Elggren is a Swedish artist who lives and works in Stockholm. Active since the late 1970s, Leif Elggren has become one of the most constantly surprising conceptual artists to work in the combined worlds of audio and visual. A writer, visual artist, stage performer and composer, he has many albums to his credits, solo and with the Sons of God, on labels such as Ash International, Touch, Radium and his own Firework Edition. His music, often conceived as the soundtrack to a visual installation or experimental stage performance, usually presents carefully selected sound sources over a long stretch of time and can range from quiet electronics to harsh noise. His wide-ranging and prolific body of art often involves dreams and subtle absurdities, social hierarchies turned upside-down, hidden actions and events taking on the quality of icons.
Together with artist Carl Michael von Hausswolff, he is a founder of the Kingdoms of Elgaland-Vargaland (KREV) where he enjoys the title of king.

"To those who swam in a lake filled with the bitter tears of Petra Von Kant, drip with salt when Twin Peaks´ heroic theme song comes out of a TV or simply burst out in tears whenever a tune sends you back to the darker corners of your childhood, we got bad news: The first full length LP by Sarajevo born Belgian Mia Prce (aka Miaux, say "MIO", not the sound cats produce) is stripped from anything that sounds rhythmic, happy or remotely like "hope" and will not stop you from sobbing!
"Sehnsucht" is a german word that one could probably translate, though that never fully holds the feeling it owns in German. (kraut) monsters like Michael Rother, Klaus Schultze and so on, translated it best with melancholic sound fields that formed the soundtrack of Miaux´s upbringing, a open sounding uptightness, sad but (really) true (to herself). These 6 new pieces are a relief for a lot of body parts: tears finally leave the bags underneath your glasses, drool finally leaves your mouth and that yellow crust runs out of your ears as those two flappers want to enjoy this lp to the fullest." Dennis Tyfus
Album released on Ultra Eczema.

Incidental Music for Invasion is a solo project of Lotti Sollevi. She has played as one half of 29:90 and presently as one half of Tv Dinner Education. She also plays live with Optic Nest and Mole Says Hi. This will be her debut solo show

IMI is working with one reality. With soundtracks going parallel and with places where your free to choose your own name. Beating dream-machines, a language that is spoken as you understand it.
Birds that sounds like a machine or a robot speaking the words of animals, hands, or a goddess that’s warning with a ke-ke-ke-ke-ke-ke
Synthesizers, fragments from tapes, bells played the wrong way, noise toys, voice toys are some tools with which IMI is putting up mirrors that are adapting to the listener or possibly the other way.

Fylkingen has changed over to card payment system.
No cash payments in the entrance or the bar.